Genetically modified cell and animal models that reproduce chromosomal translocations have been critical for understanding how these genomic rearrangements initiate cancers (see the sidebar, Chromosomal 3D structure and genomic rearrangements, below). While scientists have successfully used traditional gene-targeting strategies (such as P1 Cre-loxP [2,3], zinc-finger nucleases [4], and TALENs [5]) to generate translocations, CRISPR-Cas9 genome editing approaches have proven more efficient in some cell types, reducing the arduous selection procedures needed with these earlier methods. Indeed, researchers have employed CRISPR-Cas9 reagents to produce specific translocations, both in vitro [6] and in vivo [7,8]. These groups used 2 guide RNAs (gRNAs) to target the double-strand breaks (DSBs) in the 2 genes involved in a particular translocation. The researchers relied on the endogenous DNA repair machinery to complete the chromosomal joining.

The CNIO researchers compared the efficiency of these 2 strategies to reproduce the t(11;22) Ewing sarcoma chromosomal translocation, thought to occasionally occur naturally in hMSCs [9]. They also used HEK-293 cells in these experiments for optimization and control purposes. Delivery testing suggested that electroporation was the most efficient delivery method in hMSCs. Thus, the 2 sets of assembled RNPs ± ssODNs, targeting each of the desired breakpoints, or the all-in-one expression plasmid were transfected into hMSCs and HEK-293 cells using a Neon® transfection system (Thermo Fisher Scientific) (Figure 2). 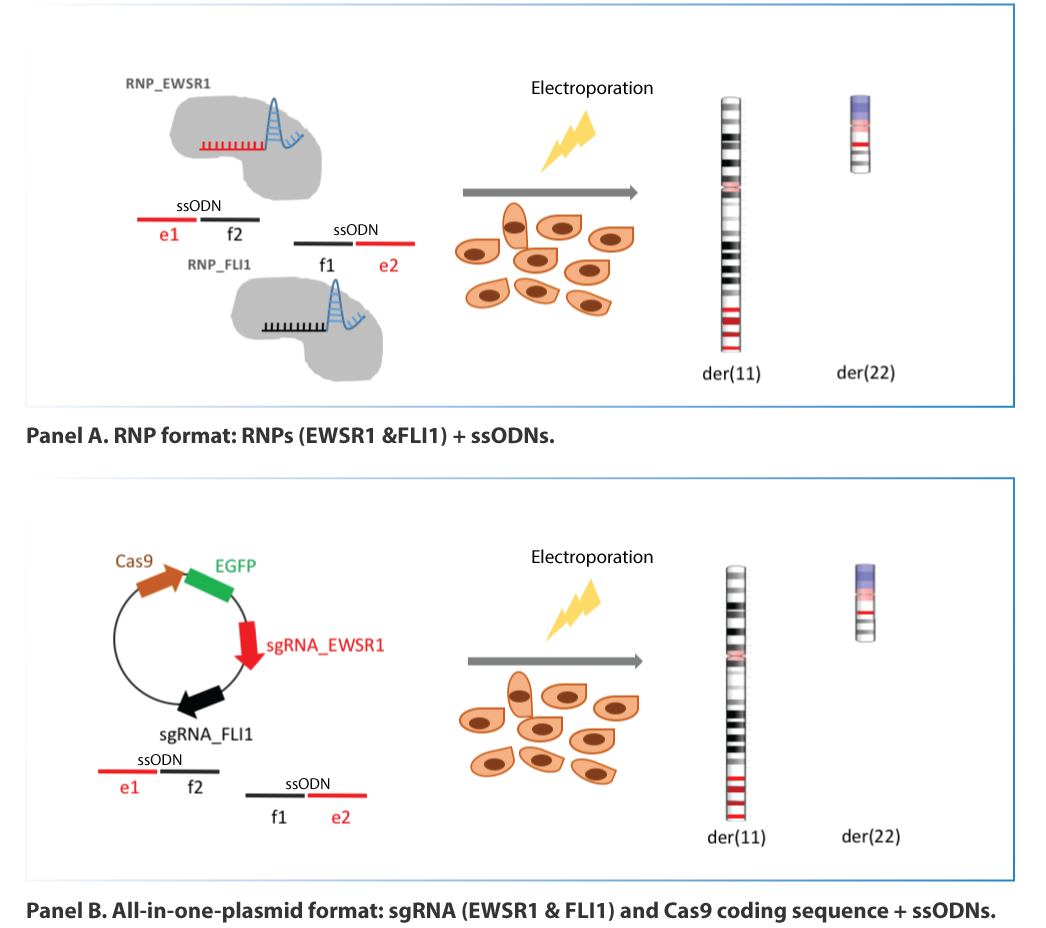 Figure 2. Delivery of RNP complexes + ssODNs or an “all-in-one” expression plasmid + ssODNs. CRISPR reagents and ssODNs were nucleofected into hMSCs and HEK-293 cells in one of two formats: (A) as an RNP containing purified Cas9 enzyme complexed with in vitro transcribed gRNAs, or (B) as an all-in-one plasmid designed to express gRNAs and Cas9 nuclease. (Figure courtesy of Rodriguez-Perales and Torres Ruiz, Centro Nacional de Investigaciones Oncologicas (CNIO; Madrid, Spain.) 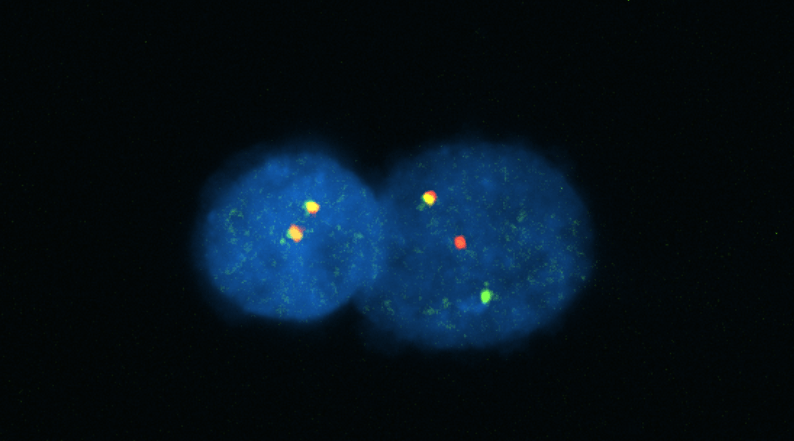 Figure 3. FISH detection of EWSR1 rearrangement. A “break-apart” FISH probe that detects the sequences 3′ to the EWSR1 gene (red) and 5′ to the EWSR1 gene (green), respectively, was used to detect the EWSR1 rearrangement. The red and green signals are separated when a chromosomal break and translocation event occur at the breakpoint within the EWSR1 gene. Left interphase nucleus: negative cell showing 2 fusion signals from normal EWSR1 loci that have not been rearranged. Right interphase nucleus: positive cell showing both a fusion signal, and green and red split signals for a rearranged EWSR1 gene. [Figure courtesy of Rodriguez-Perales and Torres Ruiz, Centro Nacional de Investigaciones Oncologicas (CNIO; Madrid, Spain).]

The RNP format (using in vitro gRNA or Alt-R CRISPR-Cas9 System reagents), was 11X more efficient at successfully recreating the t(11;22) translocation in hMSCs than when the all-in-one plasmid was delivered. Co-delivery of ssODNs further enhanced translocation [1]. The CNIO scientists also noted that off-target effects at known off-target sites in t(11;22) cells generated by RNP nucleofection were undetectable [10].

Subsequent experiments in hiPSCs likewise showed that co-nucleofection of RNP complexes and ssODNs gave 3.2X higher translocation frequency compared to co-electroporation of the expression plasmid and ssODNs. Unlike hMSCs, where the fusion gene is incompatible with viability, and thus, the genetically edited cells are only short lived, expanded t(11;22)+ hiPSC clones maintained the genomic rearrangement through the 8 weeks tested.

“It is hard to identify 2 gRNAs that produce the same cutting efficiency, likely due to location and chromatin structure. While we consistently see differences in cutting efficiency between both sites regardless of reagent delivery format, there is consistently higher cutting efficiency when Alt-R CRISPR reagents are delivered as RNP complexes vs. expression plasmid, and also a higher efficiency of translocations.” – Sandra Rodriguez-Perales, PhD, Centro Nacional de Investigaciones Oncologicas (CNIO), Madrid, Spain

Traditional animal cancer models are important to biological and biomedical studies. However, it is difficult to simulate the real context of a human body due to species differences. hiPSCs overcome this limitation. CRISPR-Cas9 can be used to easily and rapidly recreate a chromosomal translocation in these human stem cells to model human cancer. The use of the CRISPR-Cas9 system can precisely introduce point mutations or gross genome rearrangements (translocation, insertion, or deletion) into human PSCs to provide an array of genetically edited human disease models.

Translocations, the fusion of non-sequential segments of chromosomes, are responsible for a wide variety of inherited diseases. Approximately half of all cancers harbor chromosomal translocations that can either contribute to their origin or govern their subsequent behavior. For example, acute lymphocytic leukemia (ALL) and Ewing sarcoma (Figure 4) are caused by the fusion of chromosomes 4 and 11 [t(4;11)(q21;q23)] and chromosomes 11 and 22 [t(11;22) (q24;q12)], respectively. 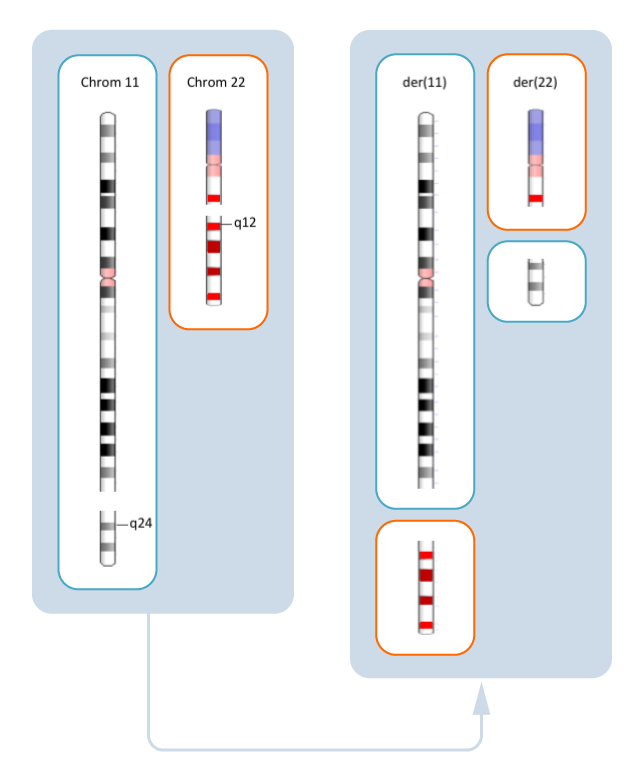 A working theory about chromosome juxtaposition within the cell provides one possible explanation for common translocation events. Some scientists believe that each chromosome has a specific location within the nucleus [11,12]. Such spatial organization is emerging as a crucial aspect of gene regulation and genome stability in health and disease. During progression of the cell cycle and cell division, the architecture of the nucleus changes, bringing specific sequences in close proximity. This spatial proximity is theorized to make chromosomal joining possible. 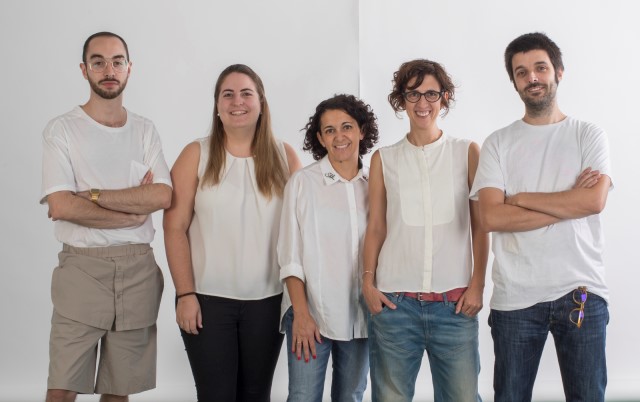 Dr Sandra Rodriguez-Perales mastered methods for reproducing genomic rearrangements in mouse cells as part of her postdoctoral studies at LMB-MRC in Cambridge. She later returned to her native Spain (first as Staff Scientist and later as Head of Unit at CNIO) to continue this research in human cells. However, the gene rearrangement strategies she developed in mouse cells did not initially transfer to human cells. She reached out to the Viral Vector Unit at CNIO, led then by Dr JC Ramirez, where Dr Raúl Torres Ruiz, at the time a graduate student, was working. Torres-Ruiz had read about CRISPR technologies and wondered if it could be applied to generating genomic rearrangements. Since then, the 2 scientists have worked together to develop efficient CRISPR-Cas9 genome editing methods to generate cellular models of ALL and Ewing sarcoma chromosomal translocations. Laboratory members are pictured from left to right: Francisco J Moya, Marta Martinez-Lage, Mamen Martin, Sandra Rodriguez-Perales, and Raúl Torres Ruiz.

Sequence-verified for use in CRISPR applications (HDR) and in vitro transcription.

Have them custom synthesized to contain your insertion sequence and homology arms for use in CRISPR HDR experiments.